Beverly Hawthorne is thrilled that she will be able to celebrate her 65th birthday with her grandchildren later this month. For 35 years, Hawthorne struggled with a crack addiction that kept her cycling between the streets, jail, and the emergency room. Finally, in January 2014, Hawthorne filled out a survey, which revealed that of the thousand of homeless people living in Fort Lauderdale, she was one of the most vulnerable.

In 2014, Hawthorne became one of the first people in Broward County to participate in a program that used federal, state, and county funds to find homes for the chronically homeless. It’s called “housing first,” and the idea is that paying the rent of an apartment for a homeless person is actually cheaper than the public price of jail and emergency room visits.

She wasn’t surprised to hear that an August 2015 audit by the county's Office of the Inspector General found the City of Fort Lauderdale mismanaged $78,231 in the program’s grant funds. Specifically, the city paid substantially more rent than the apartments were worth and accidentally charged the rental and maintenance costs twice one month. The audit concluded that Broward County did not properly ensure the city complied with the program’s requirements.

“As a result, $78,231 in grant funds, which could have been used to further the program’s purposes, were inappropriately spent,” the OIG report states. “If the County does not implement the necessary controls to ensure that grant funds pay for reasonable rents, $195,975 in future grant funds may be used on unjustified rental costs.”

Spokespeople for the City of Fort Lauderdale and Broward County could not immediately respond to a New Times request for comment. We will update this post when we hear back.

The goal of the Continuum of Care program is to end homelessness quickly—and without the hurdles of a clean drug test or employment— for chronically homeless people and families. It’s part of a bigger nationwide effort launched in 2009 through the Homeless Emergency Assistance and Rapid Transition to Housing Act. It was administered by the U.S. Department of of Housing and Urban Development and received over $2.1 billion in funding in 2014.

Broward County’s Continuum of Care program was awarded more than $21 million between 2011 and 2013 from county, state, and federal funds. Specifically, the county received $7.8 million in the 2012 grant year to run 17 projects, all aimed at housing the chronically homeless.

However, the OIG audit found the City of Fort Lauderdale charged the county much more than was reasonable. According to the report, reasonable rent for those properties cost between $450 and $700. Instead, a program manager with the city charged between $988 and $1,187 a month for those properties. The mistake wasted $57,906 in grant funds.

“The excessive rental charges occurred because the City did not understand the program requirements,” the OIG audit states. “The County lacked control process to ensure that rents charged to the grant met rent reasonableness requirements.”

Beverly Hawthorne had an inkling something was wrong. She knew that her $988-a-month rent for her one-bedroom in Sistrunk was unreasonable. After all, her apartment was infested with mice and roaches and located in a neighborhood that she considered unsafe, where flakka use was rampant, her house was broken into, and her television was stolen.

“There is no way in hell that anybody would ever pay $900 to live there,” Hawthorne says. “These are rundown apartments. I just think someone must be taking advantage with this $900-a-month shit.”

The second mistake outlined in the OIG report happened in August 2014, when the city charged the program’s rent and maintenance costs twice. That mistake cost the city $17,393. It was a city accounting error; the audit, however, pointed out that the county did not have any way of reviewing the invoice to detect double-billing.

The OIG recommended that the director of the Miami HUD office require Broward County to justify its rent amounts. Approximately $140,000 in the program’s funds have been suspended until the county receives repayment from the City of Fort Lauderdale. In November 2015, the Fort Lauderdale City Commission approved $61, 836 in the repayment. At tonight’s commission meeting, commissioners will vote to approve the final $42,669 that will lift the county’s suspension of the program's funds.

But the $78,000 mishap has Fort Lauderdale’s homeless rights activists enraged.

“This clearly illustrates that the city is totally lying about its attempts to help the indigent here,” says activist Nathan Pim. “The community needs to stand up, [to] demand that housing funds for this community are not misused by cities that are notorious in their apathy towards the impoverished.”

Jeff Weinberger, an activist with the October 22nd Alliance to End Homelessness, thinks the city could’ve prevented a lot of suffering by homeless people. “Chronically homeless people die on the streets when they can’t get into housing,” Weinberger says. “They could’ve housed a few more people, but because of their incompetence, people suffered and could’ve died.”

The homeless man who runs the Homeless Lives Matter Fort Lauderdale page and requests anonymity echoes their sentiments, referring to a debate over beachfront zoning.

“I love how the City can capitulate to the real estate developers for the Bahia Mar condos for the super wealthy, yet they can't take care of the homeless at all,” he says.

L.A Will Convert Motel Units To 500 apartments for homeless vets 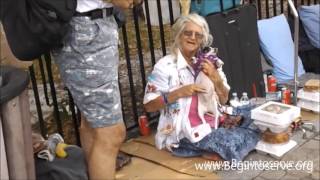 About Begin To Serve Foundation